Rockefeller University Starts Its Expansion Over a Busy Highway

Rockefeller University Starts Its Expansion Over a Busy Highway 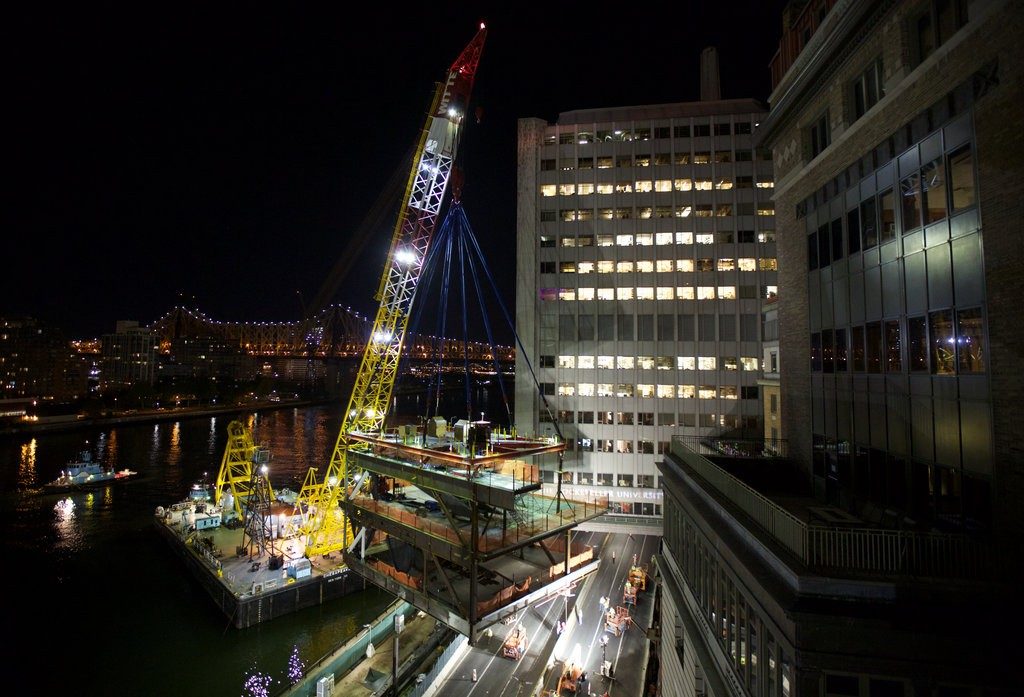 As part of the expansion of the Rockefeller University, a crane moved the first of several structures into place above the Franklin D. Roosevelt Drive early on Wednesday. Credit: Benjamin Norman for The New York Times

When the Rockefeller University in Manhattan wanted to expand its campus, it bumped up against the same problem other developers in the jam-packed city face: a lack of space.

Crammed hard against the Franklin D. Roosevelt Drive from 62nd Street to 68th Street on the Upper East Side, the university had limited space for new construction and no real estate was available on any edge of its property. So the university looked again to its border with the F.D.R. Drive, and building over it became the best option, said Timothy O’Connor, the executive vice president of Rockefeller.

“This is the only way that the acreage of the university was going to expand,” Mr. O’Connor said. “It was the most creative approach.”

The $500 million project, called the Stavros Niarchos Foundation-David Rockefeller River Campus initiative, will straddle the busy highway and will include adding a two-story building as well as two acres to the 14-acre campus. The university also plans to repair the sea wall along the East River and improve the public esplanade adjacent to the campus, according to its website.

He said Rafael Viñoly Architects, the firm working on the project, designed a building that is “utterly anti-New York” because it is horizontal, not vertical. The horizontal structure should encourage collaboration between laboratories and faculty members, he said.

With fewer points of support than a traditional vertical structure, building over the F.D.R. Drive was more expensive and technically challenging, Mr. Viñoly said.

“How do you create a significant expansion in a place like Manhattan?” Mr. Viñoly said. “It’s a clever way of dealing with the question of having a very limited footprint on the island.”

Building over the highway meant taking advantage of the air rights, which the university has owned since 1973, and represents a “new frontier in the world of development and construction” especially in New York, said Curt Zegler, the project executive for Turner Construction, which is working on the expansion. With rising demand for real estate and scarce access to land, Mr. Zegler said developers often looked to use a property’s air rights. 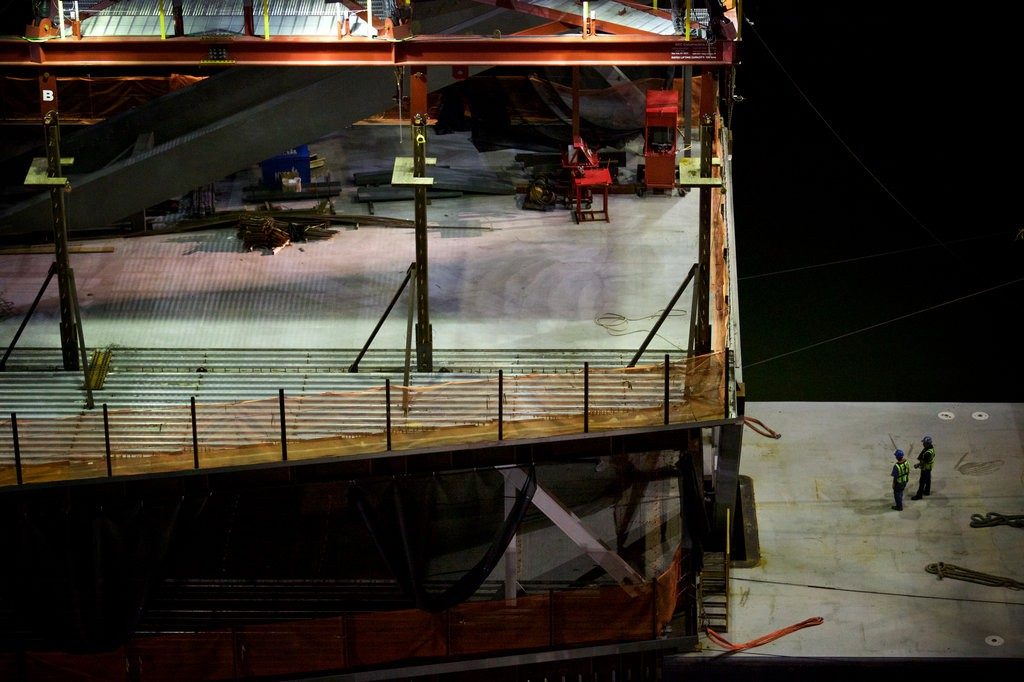 Construction workers on a barge in the East River. Credit: Benjamin Norman for The New York Times

On Wednesday morning, the first of 19 metal structures was hoisted from the East River and placed onto three columns over the F.D.R. Drive. The structure, weighing 800,000 pounds, was lifted by the Chesapeake 1000, the largest marine crane based on the East Coast.

Scientists peered through laboratory windows, and university staff members snapped photos from rooftops as they watched the floating crane work.

“The east skyline of New York City is completely changing,” said David Moskovich, 21, an intern with Lehrer L.L.C., a construction consulting firm for the project. He was among 25 people perched on a campus rooftop.

“The whole thing is a feat in modern engineering,” Mr. Moskovich said.

The yellow, red and white boom on the Chesapeake 1000 can reach as high as a 21-story building and carry up to two million pounds. The heaviest metal structures for this project weigh 1.5 million pounds, Mr. Zegler said.

The Chesapeake 1000, which was built in 1972 and is owned by Donjon Marine of Hillside, N.J., was used more than 20 years ago for another project over the F.D.R. Drive at NewYork-Presbyterian Hospital, Mr. Zegler said.

Hoping to minimize traffic problems, the 50-foot-wide prefabricated structures will be transported by barge from Keasbey, N.J., and lifted one by one onto the building’s foundation, Mr. Zegler said. Moving the structures over the highway will be done during overnight hours this summer.

At 12:15 a.m. on Wednesday, the crane raised the metal structure about 30 feet in the air, and the barge moved out from under it and headed back to Keasbey.

About 20 minutes later, the F.D.R. Drive was closed to traffic and the Chesapeake 1000 began to rotate the metal structure 90 degrees, perpendicular to the F.D.R. Drive, and placed it on three columns.

The construction began in September and is expected to be completed in 2019.

The F.D.R. Drive will be closed from 12:30 to 4:30 a.m. for each lift operation, between 61st and 96th Streets, in both directions. The East River Esplanade will be closed to pedestrian traffic between 63rd and 71st Streets. The Transportation Department offers alternate routes on its website.

A version of this article appears in print on June 15, 2016, on Page A21 of the New York edition with the headline: With Huge Crane, Rockefeller U. Starts Expanding Its Campus Over Busy Highway.